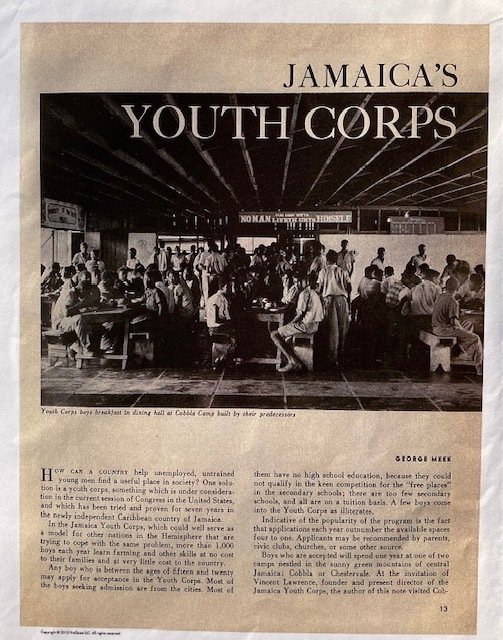 “Soon come” is a Jamaican expression particularly aggravating to Americans. It can mean ‘-It will be ready in an hour” or (more probably)‘-It will be done next week. ” The institution of  “job corps” camp however, “came sooner” to Jamaica than to the United States. My husband Bob and I work at the larger of Jamaica’s two “job corps” encampments— Cobbla Camp, Situated in the hills near the center of the island, Cobbla was established by the government’s Ministry of Development and Welfare in 1956, nearly 10 years before the first job Corps Camp was inaugurated in the United States. The camp is as self-sufficient as possible. All 650 boys help in construction work on the site produce their own food, and maintain the necessary~ implements and trucks. They take turns in the kitchen, the stores, and the main office, as well as at keeping the camp clean at all times. In return, they are given about 70$  a week (for pocket money), food, shelter, and some clothing, Between the ages of 15 and 20, the campers are for the most part school drop outs who were unable to find jobs. before coming to Cobbla. The boys stay

period of from one to two years while they learn the rudiments of a trade. When he was vice president, Lyndon B. Johnson visited Jamaica’s “job corps ”camps, and then some campers that ask if we’ve met Mr. Johnson. They are very proud when we haven’t—and they have. SinceJune,1962, approximately 20 Peace Corps Volunteers, and a few Canadian and British volunteers, have worked here in some capacity. Six Volunteers from the first Peace Corps group to Jamaica resigned for two years at the camp and were largely responsible for the construction of new workshop buildings, a staff quarters, a children’s home, and other buildings in the area. They also laid the groundwork for opening electricity, plumbing, and auto-mechanics workshops. Lee  Brumback  (Winchester, Vs.) who arrived at the camp in January, 1964, has been trying to find ways of raising Jamaican farm production above the subsistence level.

He experimented with strawberries, a crop which yield  high return. Each camper spends his first six months here on the farm, then he is usually assigned to a trade group. Cobbla Camp provides instruction in masonry, construction, carpentry, plumbing, electricity, tailoring,  shoemaking, woodworking, barbering, baking, welding, auto mechanics,  horticulture, typing, and photography. Bob and I came to Cobbla in May, 1964.He runs the plumbing shop and is in charge of the camp’s water supply. When we first came, the water tanks which serve as water reservoirs were full of moss, algae, and were, naturally, our only source of water. I am happy to say that now the tanks are white washed regularly and are kept spotless. Bob also take care of laying pipe to service new buildings, installing plumbing facilities where needed, and the like. As a side activity, he’s set up a darkroom to give 50 or so boys instruction in photo-finishing techniques—the only formal instruction of this kind on the island. Chuck  Pedrioli (Modesto, Calif. ), another of the Volunteers working at the camp, is in charge of the mechanics shop and is responsible for the repair and maintenance of all camp vehicles, including tractors. He also teaches welding and, on occasions, machine shop. The Government of

Canada has donated enough equipment to outfit all the shops presently in existence, as well as a (yet unbuilt) full-scale machine shop. Chuck runs the most popular shop ~ in the camp. the campers want a “leggo” on a vehicle (they want to learn to drive),but more than this, the boys think that welding pays better than any other trade. The electrician’s shop is run by Paul Meyers (Brooklyn).He keeps the camp lighted and the movie projector and television set running. Since this equipment is always breaking down, he’s kept pretty busy.

I teach typing, and my classes are organized on a different basis than are the technical shops where an instructor has 20 to 30 boys all day. Since I only have five type writers, my students must arrive in ,one-hour shifts. Most of them work in the office the rest of the day, and I frequently hear ‘<Soon come, Miz  Starr,” or “ I do not think I can come today—got plenty work to do.”

The typing students, however, if not always faithful in attendance, are definitely imaginative. Some of the boys made type written pictures for display * at graduation, and one did a beautiful– picture of a girl in a bikini, complete with a cross around her neck—and all with an asterisk!

Cobbla’s extra-curricular activities include clubs, movies, and sports—the camp’s choir, the Boy Scout group, a 4-H Club, and the camera club are popular. A small library is maintained by the campers with books supplied 'by  Jamaica Library Service

1955: Vincent Henry Lawrence, JP, headmaster of the Warsop Elementary School, Trelawny, is being appointed director of the Jamaica Youth Corps Camp to be established at Cobbla, near Spaulding, in Manchester. 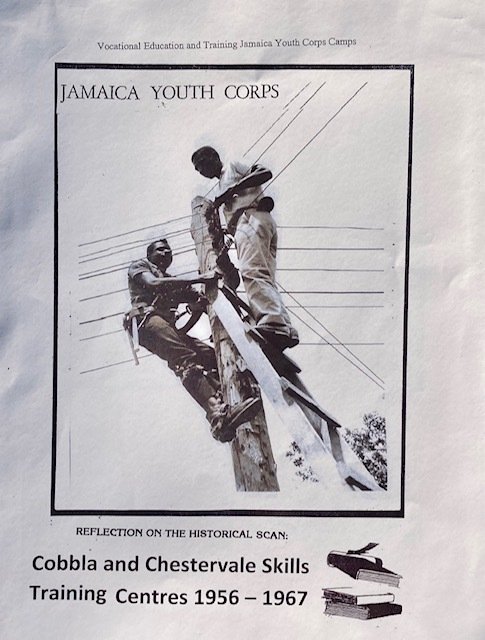 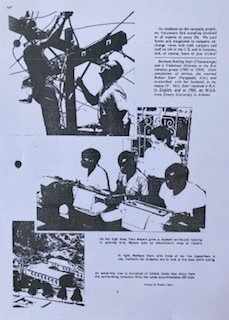